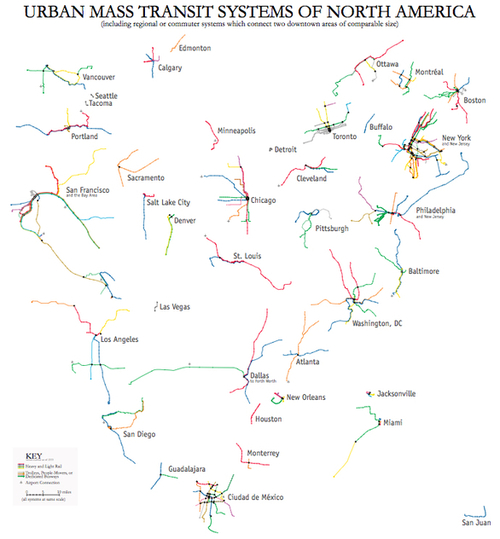 After discovering RadicalCartography online archive through StudioMagazine, I felt really anxious by looking at this map on the urban mass transit systems in North America. There are no borders, no seashore, no mountains. It’s all about connections. Or rather missed connections, since one cannot avoid wondering why discontinuous lines do not touch each other and allow people commute from Ciudad de México straight to Ottawa. Or from San Diego to LA. As Alexis Bhagat and Lize Mogel state, radical cartography defines the practice of mapmaking that subverts conventional notions in order to actively promote social change. The extension of the rhizomes of every city reveals on one hand hidden connections to the hinterland, but the other, the unserviced gaps between those urban regions that are excluded from the network. Geographical distances are clearly replaced by duration of commuting journeys. And space is superseded by time.   [via @____thenomad]
Via www.deconcrete.org